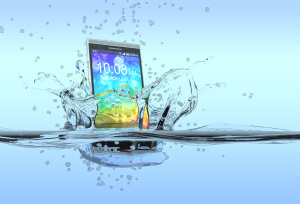 Have you ever jumped into a swimming pool or got caught in a heavy rain storm, and then had the sinking feeling in your gut when you realize you are carrying your phone and it’s most likely ruined? In 2005 it was the stuff horror movies were made of. Now however, it appears that the current direction that smartphone companies are taking are being directed unilaterally to waterproof design. How can you pick out the best device this year or next? These 4 killer waterproof (to a certain degree) Android devices will give you anything you could wish for in 2017.

What is an IP rating?

First off, it’s nothing related to the Internet. It stands for “ingress protection”, or in layman’s terms, “protection from entering”. This rating is based on a scale, 0 to 6, and it’s referring to dust protection, to up to 9X in water resistance (a device specifically made for underwater use). Each IP rating will have two digits, for example 57 referring to a 5 in dust protection and a 7 in water protection.

Expect to spend anywhere from $450 to $800 on any of the newest models, but most of the big tech makers are providing some pretty impressive technology for that price. Smartphone prices aren’t looking to go down any time soon in the future, so you might as well pay what something good is worth. Here’s a look at 4 favorites on the market right now.

Just to make things clear from the beginning, we do NOT suggest you put your phone in the water.

The fight between Samsung and Apple to dominate the smartphone popularity charts is now fierce, and what started as a lot of disappointed S7 owners has now turned into thousands of loyal S7 Edge users. By far the most popular new Android smartphone, this baby sports a 13MP camera that may seem inferior to some, but with an f1.7 aperture rating that out-performs most DSLR cameras, it’s a hard contender. Couple that with the most impressive IP rating of any non-encased smartphone of IP68, and that means you don’t have to worry about your phone going into the drink. Don’t take it swimming unless you’re a real risk taker, but you’ll be safe from all indoor plumbing and dips in the swimming pool, although we suggest you stay out.

Albeit a reluctant pick due to a lack of anything innovating or new, the truth is that the newest iPhone is still a beautiful machine. Apple has finally started to amp up its hardware to compete with the multi-gig amounts of RAM in new Android smartphones, and the iPhone 7 is certainly snappy, sleek, and responsive. Swiping in apps, to delete an email for example, or setting the dial on a new alarm, have a very realistic and personal “click” feeling, which requires a lot of performance. Couple that with a pretty impressive IP67 rating, which means enough to go swimming in 1 meter of water for 30 minutes (nothing we suggest) with it, and you’ve got a top-5 smartphone protected against any dust or weather-related damage.

Sony has been pumping out some real powerhouses in the Xperia line, and despite lacking anything that really makes one’s head spin in amazement, the XZ delivers exactly what you would expect from Sony. 3GB of Ram, super sleek design and (finally!) a USB-C port for super-fast charging and no more fumbling with the charger, makes it a fast and fun device. Sony definitely takes the lead in pixel density with their 23MP rear camera, and the battery life is certainly the best out of the four being mentioned, able to run for over two days in STAMINA mode. The XZ sports an IP68 rating that will allow it to go a half meter deeper than the iPhone 7, and its audio output via speakers or headphones is certainly the best on the market.

The HTC sports similar hardware and performance stats as the S7 Edge, just with a slightly inferior IP rating of IP57. It will withstand rain and humidity, and the battery life is extremely impressive, but HTC strictly recommends that it not be purposely dunked. But, that being said, did we mention it’s the cheapest of the 4?

It’s the perfect time to try to get your hands on one of these great waterproof smartphones while prices are at a plateau and the tech companies are working on the new models for 2018. Ranging anywhere from $450 to $800, these phones will keep you mobile, entertained, and mostly waterproof.